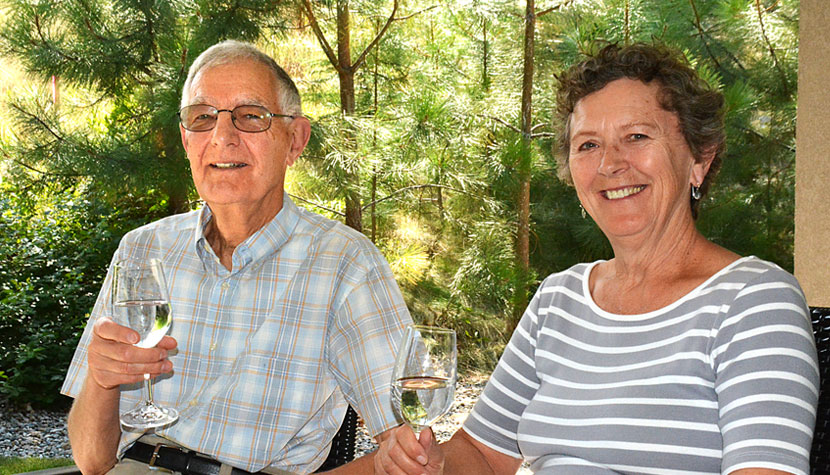 Ernst and Colleen Schneider of Penticton have made a significant donation to Penticton Regional Hospital. The SOS Medical Foundation has launched a $3-million campaign to fund a new CT scanner at PRH.

Ernst Schneider didn’t know a word of English when, at age 18, he arrived in Penticton from Germany in 1958.  Fortunately music is an international language.

Now a well-known piano teacher and composer, Ernst and his wife Colleen have made a major donation in support of Penticton Regional Hospital.

Ernst had followed his older sister to the Okanagan. Elsa immigrated to Canada in 1957 and simply by chance picked Penticton.

“My sister got a topographical map of Canada at the Canadian embassy in Cologne. She studied the map and decided BC was probably the best province. It was so open and so few cities. Then she spotted this small town between two lakes and thought that should be nice.”

Ernst’s interest in music started when he was still in elementary school. They had a pump organ in the classroom and his teacher arranged for additional lessons.

As a teenager while apprenticing in the trades, Ernst was able to continue his music studies. When he arrived in Penticton he was already at an advanced Grade 9 level in piano.

“I was working on a Beethoven sonata – I remember that quite clearly.”

He managed to get further instruction in Penticton and Vancouver and later met renowned Canadian composer Jean Coulthard who was also a music educator.

“I was really timid – me asking such a famous composer to take me on as a student.  But she said Yes,” he recalled.

Ernst spent the next 10 years taking lessons from Coulthard in Vancouver. She acted as his mentor and helped Ernst publish his first composition and get his first orchestral piece performed. Over the years, he has written well over 100 musical compositions – many of them performed by the Okanagan Symphony Orchestra.

Colleen Schneider was born in Hope and moved to Spences Bridge at age 9.  She and her family moved to Penticton in 1958.

Colleen was also studying German in high school at the time, and received some extra instruction from Ernst. “Things sort of developed from there,” she said with a grin.

Colleen worked for about 30 years at the Penticton Library, describing it as “a wonderful place to work.”

“That appealed to me – doing something really worthwhile for the community.”

The Schneiders decided to donate to the South Okanagan Similkameen Medical Foundation to help provide medical equipment for PRH.  Currently the SOS Medical Foundation is raising $3 million for a new CT scanner to be located near the Emergency Department, now undergoing a major expansion.

“The thing with the hospital is we’ve been very lucky in that we haven’t had to use it much. What’s life without good health?” Colleen said.

Ernst’s mother and Colleen’s two sisters all died of cancer.